5 things you already know about your next negotiation

At CMA, we spend a lot of time with people assisting them to prepare for their negotiations.  A frequent refrain is, “But I never have enough time to prepare.”

This may be true, and there are certainly going to be times when you don’t have as much time as you would like to prepare for a negotiation.  However, there are five things that are common to each and every negotiation (unless you are negotiating with a robot!).  Knowing these five things will allow you to make some quick decisions about your negotiation.

So what are these five things?

The five common things in every negotiation are the Five Core Concerns, originally set out by Roger Fisher and Daniel Shapiro in Beyond Reason: Using Emotions as you Negotiate.  Fisher and Shapiro tell us that:

Core concerns are human wants that are important to almost everyone in virtually every negotiation. They are often unspoken but are no less real than our tangible interests.

The five core concerns are:

Why emotion can’t be left out of negotiation

To demonstrate how important the five core concerns are, consider the story of Jackie, who was buying a camera from a specialist store.  Jackie was a professional photographer who was taking a period of maternity leave after having her first baby.  She headed in to a camera shop one afternoon, pram and sleeping new born in tow.

After spending a good 45 minutes with the sales person, and agreeing a bundle of items at what Jackie, felt was a pretty good price, the sales person turned to Jackie and said “You’re getting some pretty good gear there for your happy snaps of the baby”.  Jackie took this as a huge insult to her professionalism and skill and was absolutely furious.  Despite having negotiated a great deal, she stormed out of the shop without completing the transaction feeling utterly disrespected.

As we frequently see in negotiations, the emotion plays just as big a part in the final outcome as the substantive issues being discussed.

The five core concerns are universal.  So every time you walk in to a negotiation, even when it’s your first interaction with the person, you know five important pieces of information about them that you can use in the negotiation.

“I understand you think the price it too high, and I appreciate your belief is that our margin should be less than 50%.”

“I see you worked in Hong Kong for a while.  I was there for three years too.  How did you find it?”

“It’s a pleasure working with you.  With your expertise in design and mine in what functionality my family needs, I’m sure we’ll come up with some amazing plans.”

“Let’s sit down and just try and problem solve these differences together.”

So, even when you don’t have much time to prepare, walk through these five concerns and you will walk in much more prepared and more powerful negotiator.

Download our free Harvard-based negotiation planner here to get started.  To learn more about interest based negotiation, we recommend the book “Getting to Yes by Roger Fisher & William Ury.” 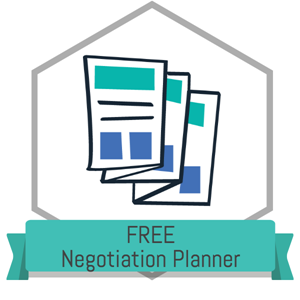